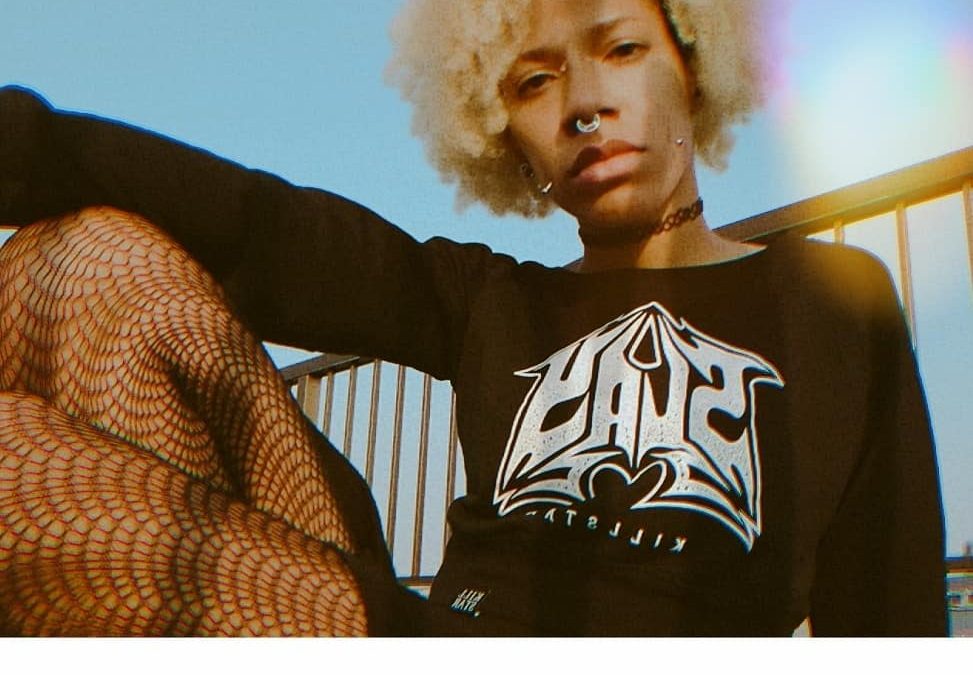 Happy September, Everyone! Congrats and ‘otsukare’ (good job) to us all, as we’ve almost made it through the last soupy dregs of this beautifully humid summer. Fret no more my friends, for the day you can put away your sweat towels and portable fans is soon to come! The weather will start strolling towards cooler temperatures, but first we’ll be enjoying the wonders of occasional heavy winds and torrential rainfall: welcome to typhoon season my dudes!

To keep you all looking forward to the upcoming fall season and festivities, this month we would like to introduce you to horror film fanatic and goth fashionista: Alyse S. Born and raised in the DMV (Washington, D.C., Maryland & Virginia area), this elegant & punky goth is also well known for her love of amusement parks and eclectic musical tastes. Having lived in Japan for nearly a decade now, in her spare time, Alyse can be found logging useful advice for fellow expats on YouTube, rocking out with the ladies of her punk band, SecondLady, or spinning all the dark industrial tunes you’ve been needing to hear, as a DJ in the local Kansai night scene. Let’s take a minute to catch up with this multi-talented artist shall we?

Black Creatives Japan: Alyse, you’re another BCJ member with many titles and skills. If we were to use a timeline, I believe things started with your YouTube channel, where you shared your various experiences living here in Kansai. What inspired you to start your channel?

Alyse S.: I would say loneliness (cue the sad little violin). Even though I had come to Japan 3 times prior to moving, these trips were all short-term school trips; home-stays in high school and an animation department trip in college. As a result, I’d never really had the chance to make any friends in Japan. Once I moved here, it was just me, Shota (my husband) and his family. But I noticed that online, people were connecting and making blogs and videos about living in Japan. So I started my LiveJournal first, then gave YouTube a try.

BCJ: Ah yes, the dreaded, but necessary evil called loneliness! At some point every person who ventures abroad experiences that and therein lies the importance of reaching out into a community, as an expat. So with your blog & YT channel you started connecting with others by logging/sharing your adventures here in the city and surrounding areas. Later on, your channel begins to display videos of your band, SecondLady; How did SecondLady come to be? When and where did you and your band mates meet?

AS: I started my band about 2 years after moving to Japan, so in 2012. Again, the impetus was to make friends, but the kind of friends that didn’t want to constantly hang out at Club Pure and sing Lady GaGa in karaoke. I found the original bassist and guitarist on a band member bulletin board, where we bonded over our love of the Josie and the Pussycats movie and decided to do a few covers from that. For about a year or so, we focused mainly on covers and trying to find a drummer, before we started making original music.

BCJ: Wow, that’s awesome! You mentioned a bulletin board; was it like Facebook or Meetup.com for bands? Do you mind giving the name of the site?

AS: Haha, no, it was even more lo-fi than those. Think of 4-chan without the weird racist/pedo stuff. It was a super simple net board where you could just make a post and people would reply via email. I don’t even think it allowed photos at the time. Now, most bands use oursounds.com for recruiting new members, which is how we found our current bassist and guitarist I think.

BCJ: Glad to hear a site akin to 4-Chan is out here using the forces of good for once! So how would you describe SecondLady’s genre and style of music?

AS: Officially, it’s pop punk because it’s a genre a lot of Japanese people immediately recognize. Though honestly, it draws mainly from its’ Josie and the Pussycat roots with a lot of alt rock rock. Lyrically and vocals-wise, I think there is a lot of riot grrrl/garage punk influence as well.

BCJ: Yes, love it! Are there any significant trials/tribulations you all have gone through so far and can speak to? Any advice about being in a band and putting yourself out there as artists, especially in Japan?

AS: Doing music independently in Japan is really hard. Especially when you have no friends, i.e. no immediate fanbase, to bring to your shows because live houses charge what they call noruma (ノルマ) and the noruma is basically how the live house guarantees that they can turn a profit that night. For example, for an event on a weekday night in Osaka, the promoters might contact you with an offer to play with the noruma set at 10 tickets. This means that your band must sell 10 tickets to the show in order to break even and not owe the live house any money. If you don’t sell 10, say you only sell 3, then you owe the live house or promoter the cost of those remaining 7 tickets. If the price they’re charging for those tickets is 2,000 yen, you’re in the hole 14,000 for that night. Now, splitting that one time between 4 members is fine, but if you’re doing shows once a month, those kinds of costs, along with paying for studio time to practice and record, paying just to play at a live house becomes a cost you’d rather cut. Not to mention that these events can vary genre-wise, so unless you’re playing at an event that caters to punks and rockers, you’ll likely not gain any new fans (a lot of these events are banking on underground idol money).

So even though we’ve been playing in Osaka for almost 10 years, it’s been a real struggle trying to find a space for ourselves where we’re happy and comfortable to play. We’ve been lucky enough this last year to get called to events where they don’t mind if we’re paying noruma or not, they’re just happy to have bands. So hopefully, that’s a rising trend.

BCJ: Hopefully you’re right. That does sound really tough, but it looks like for the moment SecondLady has found a nice pace within all the madness. And even with all of that under your belt, being led by your insatiable craving for music, you most recently starting started DJing under the name FeMQ. What impelled you start spinning and is there a story behind the name FeMQ?

AS: I was complaining a lot to a friend that all the clubs in Japan had crap DJs so my friend suggested that I should start DJing instead of complaining all the time, and I thought to myself ‘You know what, you’re absolutely right’ so I recruited some of my friends that were already DJs and started practicing. I’ve been spinning almost every weekend this summer, so that’s been a little crazy.

The name FeMQ started as ‘feminine funk’ I think, and was eventually boiled down to just Femq (as Femk looked a little weird).

BCJ: The old adage rings true then: be the change you want to see…or in this case, be the DJ and spin the tunes you wanna hear haha. What have been some of your favorite experiences thus far being in a band, spinning as FeMQ or vlogging around different parts of Japan?

AS: I think most of my favorite experiences have come from traveling to different places, recording the journey, then watching it later with Shota when we’re planning our next trip. Honestly, by this point all the YouTube is more for myself, kind of like a public family album or the goofy stuff we do during vacation.

BCJ: Aww, that’s so sweet! Having seen some of your channel already, I can say you definitely have one of the coolest family albums ever. Are there any exciting gigs, projects or other plans in the near future for SecondLady, FeMQ and your YT channel that you’d like to share with us?

AS: Haha, nope, I’m really just flying by the seat of my pants at this point. I’m sure I’ll be DJing on until the end of the year, so info about that will be up on Instagram. My band will be recording our first music video and releasing our single “It’s All Right” very soon; details also to be announced via Facebook and Instagram and I should be traveling to the Philippines and Scotland, so keep an eye out for videos on that as well. I think I have some Hawaii videos that still need to be edited too…

BCJ: Well, definitely keep updating all the family album vlogs and music ventures! As your fans, we too are along for the ride and can hardly wait to see what comes next for you. Cheers to your pants leading you towards more music and adventures from here on out!

So there you have it: whether you’re a fellow punk-rocker, vlogger enthusiast or simply into knowing some cool people, be sure to check out, follow the upcoming shows, projects & antics of Alyse, her DJ persona, FeMQ and the rest of her band members of SecondLady at the following links below and see you all soon: